The Inclusive Education Policy for Queensland’s public schools (Queensland Policy) adopted by the Queensland Education Department following the review of education for students with disability in Queensland State schools by Deloitte Access Economics (2017) (Deloite Review), commits the Department to “continuing our journey towards a more inclusive education system at all levels” guided by the applicable international human rights principles.  The Queensland Policy has been welcomed as a strong step in the right direction and a genuine effort to improve outcomes for students with disabilities and address the key criticisms and recommendations of the Deloitte Review. 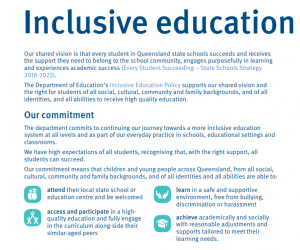 Assistant Director General Deborah Dunstone (Disability and Inclusion Branch) who described it as “probably the best work I’ve done in my career” at a QUT education event in 2018 (watch video  here), emphasised that in developing the Queensland Policy, “having to define [inclusive education] and be really clear about it from a system point of view was critical”.

Consistently with General Comment No. 4 (2016) to Article 24 of the Convention on the Rights of Persons With Disabilities (UN CRPD) which was ratified by Australia in 2008, and Sustainable Development Goal No. 4 in the 2030 Agenda, the new Policy provides:

“Inclusive education means that students can access and fully participate in learning, along-side their similar-aged peers, supported by reasonable adjustments and teaching strategies tailored to meet their individual needs.  …

Inclusive education differs from the following approaches and practices in significant ways:

Segregation – students learn in separate environments, designed or used to respond to their particular needs or impairment, in isolation from other students.” 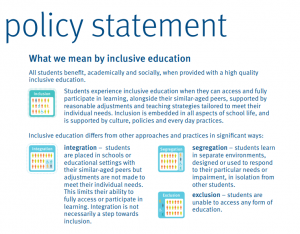 General Comment No. 4, which provides the most authoritative guidance to governments on their obligations to students with disabilities under international human rights law, further states that:

However, less than a year after the Queensland Policy’s launch and months after the Queensland Government’s commitment to a human rights approach through the passage of the Human Rights Act 2019, Grace Grace, the Minister appointed to the Education portfolio in the second term of the Palaszczuk Government, has announced in Parliament new budgetary allocations that deliberately preference segregated education of students with disabilities and has praised an increase in segregated settings for students with disabilities.  This not only runs counter to the Queensland Government’s policy commitment, but also breaches the principle of “progressive realisation” of UN CRPD Article 24 General Comment No. 4 and further represents an impermissible deliberate retrogressive measure that must be immediately addressed.

At a Budget Estimates Committee hearing on 1 August 2019, the Minister stated as follows.

“Ms GRACE: The Palaszczuk government has a proven track record of supporting school students with a disability. I am proud that this budget continues that support. The budget includes a four-year $136.2 million funding boost to provide additional teachers and teacher aides in state school special education services across Queensland. The number of students with a disability enrolled in Queensland schools is growing.

I remember opening a new school extension—a beautiful new building—on the Sunshine Coast. One family there came from northern New South Wales. They had moved to Queensland and they said that the provision of education for their daughter at that special school on the Sunshine Coast was second to none and absolutely amazing. They were beaming about the manner in which their daughter was growing because of the education our special schools deliver every single day. I take my hat off to those teachers and teacher aides who work in this area and do a wonderful job. That is one example of many.

We are investing in facilities in special schools. The quality of education is fantastic. We are looking forward to employing an additional 150 teachers and 90 teacher aides next year alone in order to give our students the special support they need.

The budget includes facilities such as a new special school to open in 2021 at Palmview on the Sunshine Coast and completion of construction of a new secondary special school at Caboolture, opening in term 1 of 2020. I was very proud to visit with the local member, Minister Mark Ryan, a couple of weeks ago to see the progress of that school. It will be state-of-the-art for its students. The school will welcome up to 160 year 7 to 12 students in term 1 of 2020. It will be a game changer for the Caboolture community. Well done there.”

All Means All has been concerned for some time that, unlike her predecessor Kate Jones who oversaw the Deloitte Review and the development of the Queensland Policy, this Education Minister does not appear to understand  or support her own Government’s policy setting, which she has rarely acknowledged since her appointment to the role.  Indeed, to be proud of increased investment in segregated education and the “quality” of segregated education in Queensland as “fantastic”, evidences a failure to recognise not only the direction in the Queensland Policy but the clear statements by the UN that segregation of children with disabilities is a human rights issue and constitutes discrimination against them.

The Minister’s position also flies in the face of over 40 years of research that strongly and consistently evidences that segregated education is not beneficial – or safe – for students with disabilities.  Indeed, the national Royal Commission into Institutional Responses to Child Sexual Abuse recognised in its Final Report in 2017, and in the research it commissioned, that segregation, including in education, is a ‘setting-based risk factor’ that heightens risk of abuse of children with disabilities.

The issue of the increase in segregation of Australian students with disabilities is expected to be examined by the UN later this year during its review of Australia’s report on compliance with the UN CRPD.  The issue was also raised by the UN Committee on Economic, Social and Cultural Rights in the course of its 2017 consideration of the fifth periodic report of Australia on its implementation of the International Covenant on Economic, Social and Cultural Rights, when it asked Australia to explain “evidence of a rise in segregated education’ and recommended in its Concluding Observations that Australia take “effective steps to ensure that children with disabilities, including those with cognitive impairments, can access inclusive education”.

It is also deeply disappointing that the Minister has sought to perpetuate the myth that parents of children with disabilities want their children to be segregated, without acknowledging the “gatekeeping” and other systemic failures that drive them out of the general education system in the first place, including because of budgetary allocations that preference segregation.

As noted by delegates during the sessions for the drafting of Article 24 of the UN CRPD in rejecting segregated “parallel” models of education, “segregated education is in fact a false choice enforced by lack of resources and access to support”.

We call on Minister Grace and Premier Palaszczuk to confirm their support for Queensland’s Inclusive Education Policy, and encourage the Queensland Government to move as expeditiously and effectively as possible to transfer resources from segregated to inclusive environments as is required of governments bound by the UN CRPD.