All Means All, which had made a Submission to the review in July 2019, was able to meet with several members of the Committee and the office of the UN Special Rapporteur on the Rights of Persons With Disabilities, to discuss the human rights of people with disabilities to inclusive education and the significant evidence of serious systemic failures and substantive non-compliance by Australian governments, with Article 24 of the CRPD.

Similar concerns about inclusive education were also expressed in the Civil Society Shadow Report and the National Human Rights Institution Report submitted by the Australian Human Rights Commission, and highlighted in the statements made by Dr Ben Gauntlett during the constructive dialogues held on 12 and 13 September 2019 (Constructive Dialogues).  In his opening statement at the Constructive Dialogues, Dr Gauntlett noted that “Australia has a segregated education system, where schools have turned away students because of their disability, and the rate and extent of segregation is growing, which is contrary to Article 24 and General Comment No.4.” You can read Dr Gauntlett’s full statement here.

The Committee’s Concluding Observations, which relate to the 35 key issues identified by the Committee in its “List of Issues Prior to Reporting” and sought to be addressed in the Australia Report, recognised some positive aspects, including the introduction of the NDIS and the establishment of the Royal Commission into Violence Abuse, Neglect and Exploitation of People With Disabilities, but expressed serious concerns about a range of issues and strongly criticised, among other things, current legal and policy frameworks and the general failure of Australia to harmonize domestic legislation with the CRPD.

The Committee also recommended that the Australian Government establish formal and permanent mechanisms to ensure the full and effective participation of people with disabilities, including children with disabilities, through their representative organizations, in the development and implementation of legislation and policies to implement the CRPD.

In relation to inclusive education, and in comparison with the 2013 Concluding Observations (CRPD/C/AUS/CO/1) of the Committee on Australia’s initial report, the Committee’s comments during the Constructive Dialogues and its 2019 Concluding Observations in relation to Article 24, clearly reveal the Committee’s increased concerns with Australia’s failure to progress inclusive education and alarming growth of segregation of students with disabilities contrary to Article 24 and General Comment No.4.

Notably, this time around, the Committee has provided more specific recommendations (at paragraph 46 of the 2019 Concluding Observations), including the following, which the Committee expressly stated should be read in line with the Committee’s 2016 General Comment No. 4 (the Right to Inclusive Education) and targets 4.5 and 4.a of the Sustainable Development Goals:

The Committee also called for an end to the practice of detaining and restraining students with disabilities (paragraph 28(e) of the 2019 Concluding Observations). 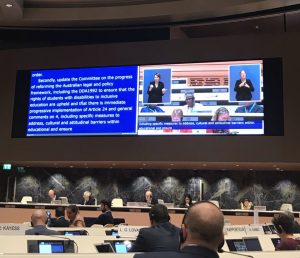 The Committee’s concerns in relation to the implementation of Article 24 and inclusive education were also evident in statements made during the Constructive Dialogues.  In this regard, Committee Chairperson Mr Danlami Umaru Basharu (at 1.31.34 of the UN webcast Consideration of Australia (Cont’d) – 500th Meeting 22nd Session Committee on Rights of Persons with Disabilities – 13 September) specifically questioned Australia about “reforming the Australian legal and policy framework, including the [Disability Discrimination Act] 1992, to ensure that the rights of students with disabilities to inclusive education are upheld, and there is immediate and progressive implementation of Article 24 and General Comment No.4, including specific measures to address cultural and attitudinal barriers within education departments and at school administration levels and ensure adequate training of and support to school administrators and educators, for the inclusion of students with disabilities.”

Country Rapporteur for the review of the Australia Report, Mr Monthian Buntan, in his final statement at the conclusion of the Constructive Dialogues (at 2.41 of the UN webcast Consideration of Australia (Cont’d) – 500th Meeting 22nd Session Committee on Rights of Persons with Disabilities – 13 September), further stated that the Commitee is “very deeply concerned at the lack of legally enforceable instruments to enforce several issues such as accessibility, inclusive education, employment”.

More broadly, long-standing Committee Member Mr Martin Babu Mwesigwa who participated in and recalled the 2013 review of Australia noted (at 2.42 of the UN webcast Consideration of Australia – 499th Meeting 22nd Session Committee on Rights of Persons with Disabilities – 12 Sep 2019) in reference to the Australia Report, “the information implies that substantially not much has changed in Australia since the review of the initial report in 2013” and that “many of the issues raised in 2013 and communicated in the then Concluding Observations, are the same issues that civil society has brought to our attention 6 years later in 2019.” Mr Mwesigwa then asked “What, in the opinion of the delegation of Australia, have been the reasons for failure to address most of the issues raised in 2013, that formed the then Concluding Observations, over the last 6 years?”

All Means All welcomes the 2019 Concluding Observations and the strong guidance provided to Australia on the human rights of people with disabilities and the need to discharge its international law obligations by implementing the CRPD, including notably Article 24 on the fundamental human right of all students with disabilities to inclusive education.